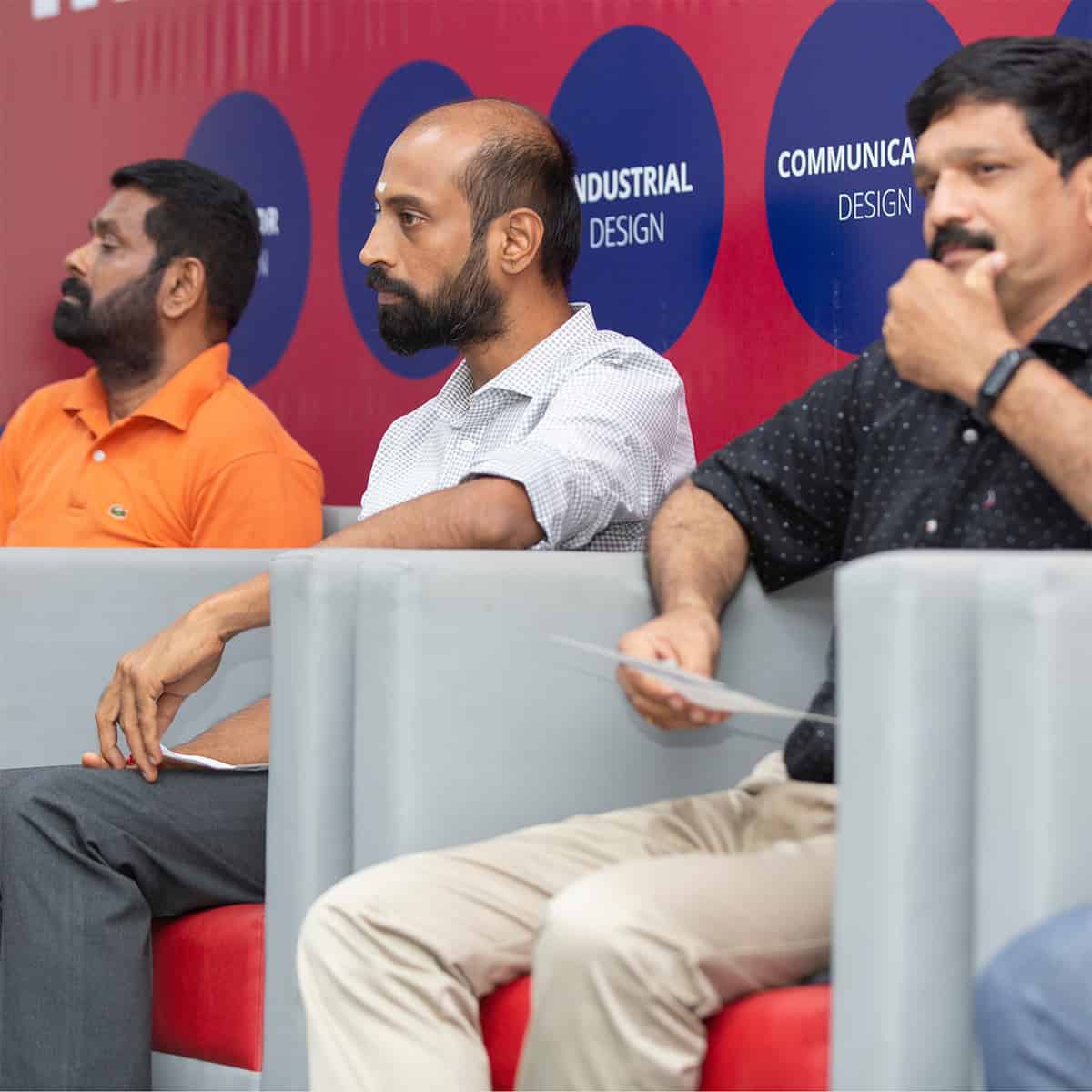 A New Beginning with Induction Day 2021 - Passion, Promise & the Process

“Oh, the treasures a winter brings
To its spring.
How sweet it is to feel that something is
Both new and old.
The earth and sky love to rest and play and grow
Together; theirs is a dialogue of unity.“

Just as the seasons make way for each other, the first batch of students at DOT School of Design welcomed their juniors into the campus with camaraderie to share their space with their juniors to learn and unlearn at DOT. The Induction Day ceremony on the 20th of October started with the second-year students taking their first steps into the world of design accompanied by their parents/guardians. What ensued was a heartwarming day of joyous celebration and inspirational speeches by the guests who honored the event with their presence.

The day started with the parents giving a short testimonial about their experiences with DOT followed by a separate orientation for the students as well as the parents. The parents were shown a short presentation highlighting the rules and regulations of the campus. Information regarding hostel life, Design education, Career opportunities and the administrative procedures were explained in detail. The Q&A session allowed the parents to voice out their queries. Mr.Shankar, the institute’s administrator, explained how DOT’s curriculum is based on hands-on activities where the entire campus is the student’s playground to learn, synergize and collaborate.

Meanwhile, the freshers witnessed the exhibition set up by the DOT faculty and their seniors which was an ode to life at DOT. The exhibition was titled, “Impasse to Hope - College as Home to Memories”  which talks about breaking the impasse and inertia the students have encountered during the pandemic and encouraging the students to look ahead with a sense of hope. The video prepared by the seniors was also played in the gallery. The first years then imprinted their unique signatures on the campus with a quick sketch and a personal message which was displayed on the corridors.

Shortly afterward, the main program of the event commenced with a prayer song followed by a welcome note from the Chairperson, Mr.  AR. R. Raammnath. The academic coordinator, Mrs. Elizabeth Joseph introduced the audience to the learning culture at DOT.

The advisors offered guidance to the students by explaining the interrelation of art and design. Art produces problems whereas design resolves them. Mr.Sathyaseelan explained how the design process is based on creative expression, empathy and problem solving along with a keen eye for aestheticism. Form & function are the fundamentals of any design, but what makes it great is the empathetic response to the target audience and its ability to evolve along with the requirements of the people. He concluded, “Hence a design education is imperative for the progression of the nation, to understand the nuances of design and equip the students with the required skills to develop their own unique design processes”.

The Chief Guest, Mr. Vasanth S. Sai - Director of multiple groundbreaking Tamil Films, along with the Guests of Honor, Mr. Rajakumar Mani - Creative Director at Interactive Design Cognizant, Mr. K. Vijay Sekar - Creative Director at Go Brand 360, Mr. EV Ganesh Babu - Film Director, Producer, Actor & Activist, Mr. R. Krishnakumar - Director & Partner, at Golden Chest Entertainment, Mr. Sebastian - Technical Director & General Secretary in Tamil Nadu Blind Football Association, were honored with a memento and invited to share their experiences with the students. Their thought-provoking speeches inspired the students to not only create an identity for themselves in the design field but also to stick to the process of becoming better designers.

Mr. Vijay Sekar explained how design is playing a major role in all industries and also hinted at increased job opportunities in the future as the stalwart companies such as Apple, Google & Facebook are establishing a separate department for Design. The Creative Director from Cognizant, Mr. Rajakumar Mani spoke about the differences between an artist and a designer. Mr. EV Ganesh Babu demonstrated the importance of coming forth when opportunity knocks on one’s door. “Vaazhkai Oru Murai, Vaaipu Oru Murai” was the message he left the students with, to grab life by its collars fearlessly. Mr. Sebastian introduced the audience to blind football and offered the chance of designing the merchandise for Chennai’s first Women’s Blind Football championship to the freshers.

Mr. Krishnakumar shared an excerpt from artist Keshav’s interview to explain how developing a unique style is an organic process. Design is a fiercely competitive field that requires courage to experiment and create a niche for themselves. The guests of honor infused insightful information into lighthearted and engaging speeches. Lastly, the Chief Guest, Mr. Vasanth S. Sai shared the process of making movies that transcend their generational standards. He mentioned the three steps to be creative and intuitive are, “Developing one’s sensibilities to observe the world more keenly, Making mistakes and falling forward to learn the essential values of life, and lastly, to learn for the joy of learning without anticipating the outcome”.

The event ended as a campus filled with enthusiastic young adults and their proud parents left for the day. The words that remained in everyone's mind were passion, promise and process. To stick to the process with passion was the promise that DOT offers to the students and vice-versa.