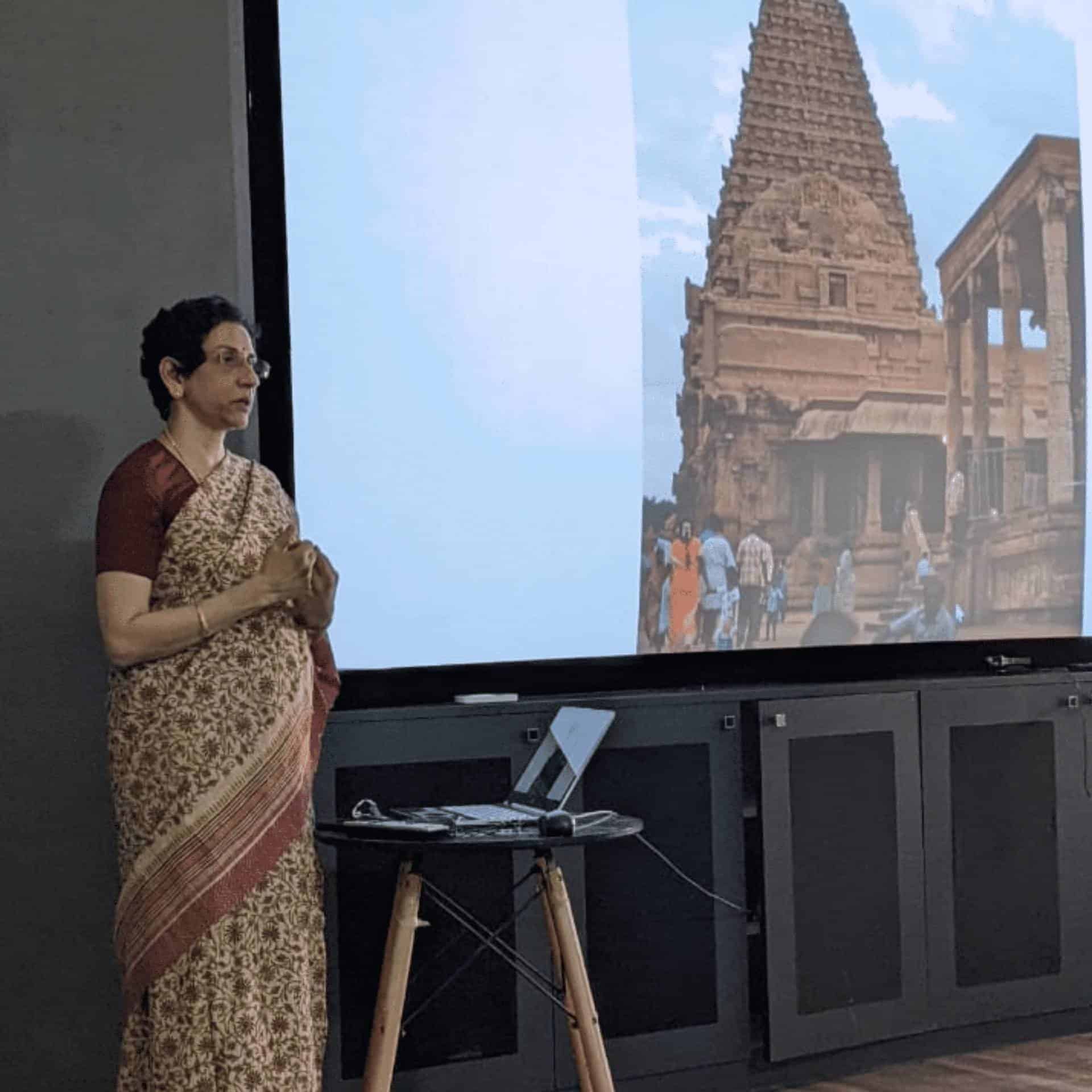 The Fight Against Vandalism for the Preservation of Indian Heritage

Dr. Shri. Chithra Madhavan Ph.D. is an acclaimed historian and the recipient of two post-doctoral fellowships from the Department of Culture and from the Indian Council of Historical Research, Government of India. She has authored many books such as  History and Culture of Tamil Nadu: As Gleaned from the Sanskrit Inscriptions (two volumes), which portrays South Indian heritage monuments and inscriptions. Likewise, she delivers lectures at many institutions in Chennai like Kalakshetra Foundation and across India on various topics related to heritage and historical monuments.

She visited DOT School of Design, Chennai to commemorate the 30-day art gallery show titled “Irai Idam Evar” on 10/12/2021. After her visit, she interacted with students of B.Des, M.Des and BFA on the topic “Temple Architecture of South India”.

Dr. Chitra began her presentation with slides showing images of different temples and architectural monuments across South India. She introduced different ages of architectural developments which began with the construction of temples using perishable materials such as wood, bricks, etc., which is evident only in the literature references. She detailed how with the carving of hills, temples were built to remain permanent and they have named cave temples which were also built by humans. She illustrated this with the image of the Badami cave temple built on sandstone hills in Karnataka during the Chalukya dynasty.

She explained the importance of cave temples in Tamil Nadu with illustrated images such as Mamandur cave temple (Kancheepuram) and Mandagapattu cave temple (Villupuram). She elaborated on how these earliest temples were carved out of Granite hills and constructed during the Pallava dynasty. After which she illustrated the invention of Monolith construction of Temple built using Single rock with the images of Mamallapuram Temple such as Gajaprishta.

She explained that the modern architectural development came only with the transport of rocks to the desired location and by which temples were built as huge monuments sponsored by Kings with organic colours and intrinsic carvings,  she illustrated these with the images of Mamallapuram Shore Temple. Likewise, she illustrated images of the monuments and temples across Tamil Nadu, Andhra Pradesh, Karnataka and Kerala showcasing the Vimanas in Temple and the intrinsic beauty of Hoysala Temple in Karnataka. She closed her presentation by showcasing the beauty of Tanjore Brihadeeswara Temple and the Gangaikonda Cholapuram Temple. When the students questioned her about the use of colour, she replied stating the importance shown by the King to portray the beauty of the temple through organic taints. She further added that the organic paints were costly and thereafter using chemical paintings on rocks reduced the rock's ability to expand and contract which led to cracks and damage to the structures. When asked about her interest in history, Dr. Chitra replied that her early interest was towards Egyptology and Indus Valley civilization, once during vacation  She had the chance to visit temples across Tamil Nadu like Srirangam and Vellore which helped her to understand and develop her passion towards Tamil history and archaeology.

She summed up her interaction by thanking our Chairman Mr. AR.R.Raammnath for providing the opportunity to interact with the students as well as to visit the well-established DOT School of Design gallery. Mr. K. Balasubramanian concluded by thanking Dr. Chitra's services in organizing students and developing an initiative to stop the vandalism of Temples and preserve the heritage of Tamil Nadu.